Although the notion of integrating residential architecture with nature is not exactly new on its own accord, the translation of this idea into tangible built space is a process that can take shape in a multitude of forms. Spurred on by distinct parameters and objectives, this approach can yield unique […]

Although the notion of integrating residential architecture with nature is not exactly new on its own accord, the translation of this idea into tangible built space is a process that can take shape in a multitude of forms. Spurred on by distinct parameters and objectives, this approach can yield unique perspectives with each different case, context, scale, or program. From the incorporation of biophilic design elements to innovations in organic architecture, every iteration of this archetype has gradually propelled the sphere of residential design to blend further into natural ecosystems – ushering humanity closer towards its original living environment. Labri House, a residence for a middle-aged couple in Vietnam, by Nguyen Khai Architects & Associates is yet another incarnation of this model, set along a 100 sqm plot in the city of Huế.


The designers reveal that during preliminary discussions with the couple, their principal wish was: “to build a home where the two of us could spend the rest of our lives happily and peacefully.” Nestled into the end of a narrow alleyway, the manifestation of this desire is bordered by a pond to one side while its front is veiled by a dense undergrowth of plants. Since the project was conceptualised as the clients’ retirement home, it harnesses this natural screening barrier to conceal private sections of the program from view, granting a fair degree of seclusion from its urban surroundings.


Beyond this, a collection of four transparent blocks of differing heights have been randomly rotated and placed along the site in relation to existing natural features, encompassing the majority of the program areas. Through landscape design situated within the negative spaces between them, the design elevates the concept of a “home in nature” to a whole new level, transforming the plot into a lush, forested microcosm where vegetation percolates into every corner. “As the name speaks for itself, ‘Labri’ is literally a secret shelter, which is not easy to find either on a map or even in practice. On viewing the house, you might get the feeling that it has not been constructed by human hands, but rather, it has sprouted from its context as naturally as a tree comes out of the ground,” relays the firm in a statement.

Featuring triple-layered envelopes consisting of glass, vines, and concrete, the cubical volumes are connected by covered walkways, which form a single indoor route throughout the site, as courtyards and external paths between them allow for more direct access. Among the four blocks, the largest houses the bedroom, leading into an attached bath followed by the kitchen, and finally, the combined living and dining space. Each of the blocks is a single storey, with high ceilings in some adding volume where necessary. Within the outer glass enclosure, vines have been dangled over the inner concrete frame, with a buffer area between them acting as a transition zone under this nested structural configuration.

In the absence of a traditional front façade design, the entrance to the home is situated at a point of convergence between pathways that emerge from the kitchen and living blocks. The paving between the blocks and green areas puts a biophilic spin on harlequin tile flooring, with grass and concrete pavers determining the texture of the ground. Only 55 sqm of the total site area is occupied by built forms – the rest acts as a habitat for local flora and fauna. “Apart from humans, there are other creatures living inside this shelter, or we could say, this forest. There are birds, butterflies, and trees which make up the majority of the living organisms here,” mentions the firm.

Despite Vietnamese architecture being renowned for its astute use of natural materials such as brick, bamboo, stone, and wood, the more contemporary materiality here radiates a clarity and lightness that still fits into its setting. Perhaps the most captivating result of this choice is how the blocks’ transparency makes them exceedingly open to natural light. In fact, by eroding all distinctions between interior and exterior, residents can clearly see into each of the other blocks from any point along the site. The architects reveal, “There are no boundaries in Labri, no interior walls to separate spaces, and no exterior walls to block the house from the outside world. Users could watch the moon and stars in bed at night, or raindrops slipping on the glass on rainy days.”

Fixed ladders allow residents to scale the blocks, where each roof scape is home to a frangipani tree. Selected due to their status as indigenous vegetation that thrives in local climates, the trees can shade the blocks below from excess sunlight while also being capable of enduring harsh downpours during the rainy season. They also morph throughout the year while blossoming in spring, exhibiting leafy flourishes during summer, or shedding leaves in the winter. By means of their introduction on the roofs, alongside the vines that have been draped on the walls to form green curtains that offer privacy, the architects have embedded nature into each of the home’s surfaces.


Passive cooling is also central to the design, as seen in the use of skylights on the roof surfaces which allow hot air to exit the structures. Additionally, pivot doors and windows facilitate cross-ventilation, while the combination of vines, frangipani trees, and landscaping acts as a buffer – absorbing excess sunlight and heat throughout the day to keep internal spaces cool. Within the confines of the blocks, the interior design scheme is exceedingly minimal, expressed mainly in concrete partitions and wood furniture, merging easily with the naturalistic theme throughout the residence.


Even though Labri House is not the first example of organic or biophilic architecture in a residential context, its juxtaposition of natural and man-made does make a poignant statement on how the act of building respectfully in accordance with nature can yield results that are far greater than the sum of their parts. The result in this case, is a sanctuary filled with life, light, and activity, that achieves an appropriate balance between isolation and connectivity. Moreover, the building’s unique configuration is one that benefits an entire ecosystem rather than just its human users. By choosing to build in this manner, Nguyen Khai Architects & Associates has made a very strong case for further investigation into this outlook, as well as the need for humanity to coexist in amity with the natural world, for the good of all species and the planet at large.

Tue Jul 26 , 2022
Milwaukee Public Museum is presenting a first glimpse at the structure of the new downtown museum — which is inspired by a very well-regarded Wisconsin condition park. The five-story museum, to open up in 2026 at West McKinley Avenue and North Sixth Street, will be a mainly concrete and glass framework. Its exterior […] 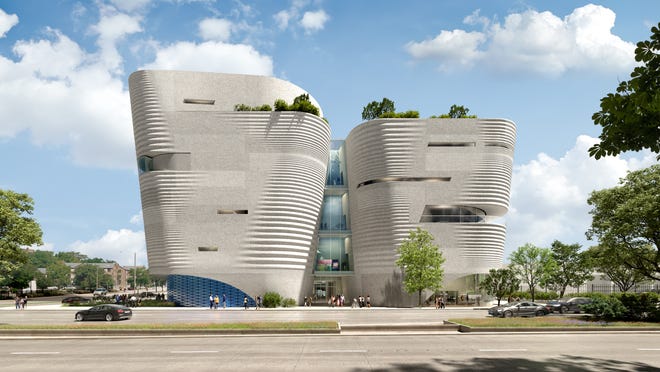